FODs Make a Cool 2 Million Off of the City.  See 14 Below for Details.

See some of the "things" Dan has
"gotten done"

For the following reasons, Mayor Dan Coody should consider his ways:

1. The curse words he uses in his vocabulary are beneath the dignity of his office. 2.  He used $500,000, or so, of our tax money to pay political favors to the Sierra Club and other "Green" groups and individuals under the guise of settling a law suit.  Now, we have a budget crisis.  Is anyone surprised?

3.  He apparently told a member of the Planning Commission to "kill" a local building project because he didn't like the developer.  So, if the mayor likes you, you can build in Fayetteville but if he doesn't like you, well, too bad.

4.  He is spending tax dollars buying new vehicles for city employees.  Here are pictures of the new Honda Element used for parking enforcement.  Certainly, a used vehicle of some sort would transport someone from one meter to the next.  Also rumored are new VW Beetles given to favored city employees.  The mayor is now seeking sales tax increases to cover his "extra" expenses.  Here is a picture of the city's parking enforcers parked illegally because the metered lots were full. The citizens get ticketed and towed while the city employees have free reign.

5.  He interfered with a couple's yard sale even though he knew they were honest.  Click here to read the entire story.

6.  On the smoking ban election night, he was celebrating with the anti-smoking folks.  He apparently supported the smoking ban.  If you enjoy smoking with your meal, you'll now have to go to your favorite Springdale restaurant.  Bye bye sales tax dollars.  Congratulations Dan, you've run more business, and sales tax dollars, out of town.

As of 6-22-04, and after the smoking ban, at least 4 restaurants have shut their doors.  Say goodbye to the Ozark Brewery, the Hoffbrau, Cafe Santa Fe and Pete's Place.

7.  He apparently misinformed the public.  In his State of the City speech given in February 2004, he claimed,

"Our City Attorney's Office continues to successfully defend the City when necessary.   The City of Fayetteville suffered no civil litigation defeats and has not had to pay anything to settle litigation in 2002 or 2003."

On June 19, 2003, in Federal District Court for the Western District of Arkansas, the Honorable Judge Jim Larry Hendren stated in a Court Order,

In his Order, the Federal Judge declared some 14 sections of the Fayetteville Sign Ordinance "unconstitutional"  That sounds like a "civil litigation defeat" to me!

8.  Under Dan Coody's administration, the City implemented a trash pickup plan for Fayetteville residents with increased fees and unfair rules.  To see my take on these rules visit www.Fayettevilletrash.com.

9.  Mr. Coody has apparently now been caught committing the crime of using his city-paid-for cell phone to make personal and campaign phone calls.  Maybe Mr. Coody should consider his ways!  Arkansas election laws state that "it shall further be unlawful for any public servant to use for campaign purposes any item of personal property provided with public funds."

Issues 10-13 are from a Gary Combs pamphlet. To view the pamphlet in its entirety, click here.

10. A bridge within the city limits of Fayetteville is crossed over by 1,000 to 1,200 vehicles a week.* The city was eligible to receive up to $1 million in funds for the replacement of this bridge under the Federal-aid Highway Bridge Replacement and Rehabilitation Program. ** Why hasn't this bridge been replaced? Because the City Council led by Mayor Dan Coody voted not to accept the funds.*

Mayor Dan Coody chose to throw out the lowest bid because of a "technicality." *** Doesn't the mayor have a responsibility to Fayetteville taxpayers to make every effort to secure the most cost-effective contracts for city projects?

12. Quote: "If I see Gary Combs' name on any development or his fingerprints on any plans, I'll make sure the projects are not approved."* Mayor Dan Coody makes decisions for the city based n personal reasons, and that's not good for Fayetteville.

* Source: Sworn Affidavit by Gary Combs on 9/10/04 of conversation on or about October 2003 between Mayor Dan Coody and Gary Combs as witnessed by Ronnie Hissom.

13. Sherman Anti-Trust Act: How much public property is being sold secretly in Fayetteville? PUBLIC property needs to be sold as PUBLIC auctions. Has this administration aligned itself with two or three developers for the so-called public-private development of public lands without other qualified developers knowledge? Restriction of free trade is a violation of the Sherman Anti-trust Act.

Oh to Be a FOD (Friend of Dan)! Dan Coody and some of his friends that are real estate developers came up with an idea that will net Dan's friends about two million dollars. The City of Fayetteville, i.e., you and me the taxpayers, will buy the old Mountain Inn and surrounding property then demolish unwanted structures and gut the remaining structures.  All of this will cost the City about 2.3  million, or more, dollars.  Then, the City will sell all of this property to the FODs for a mere $300,000.00.  Thus, the FODs make a cool 2 million on the deal.  Oh, to be a FOD!   Click here to see a picture of the crane being taking down after remaining unused for around 14 months at a cost of around $30,000/month. All the while construction on the Renaissance Tower never even began.

15.  Dan might quickly tell you how wisely he managed Fayetteville's city budget.  However, you should ask him what the balance in the reserve account was when he took office and its balance today.  This will explain where he got millions of dollars to waste. 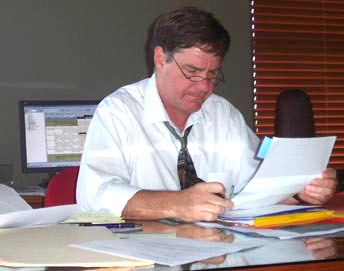 What's Dan Thinking?  Dan looks stressed out.
Maybe he's trying to figure a way to get more tax dollars
from the citizens of Fayetteville!

This Site Hosted By
HOSTNUT. COM